The rain stopped. The sun shone. And we travelled as slowly as we could – which, on a barge is S – L – O -W – through the Loire Valley and southern Burgundy, both places for, as they say in French, the umpteenth time. We feel so at home there in what one of our stack of guide books refers to as “the quintessential France.” Far from cities. Far from home. Far from the American Presidential circus. Far from mass shootings. Bombings. Knifings. Truck murders. Back in the France that still feels like 1955.

We rode our bikes from the mooring at Santenay, in prime Burgundy wine country, through some of the world’s top vineyards. Check out the towns’ names along our bike route.

We spent May and June basking in the warmth and comfort of rural France. Eating and drinking our favorites. Comfortable. 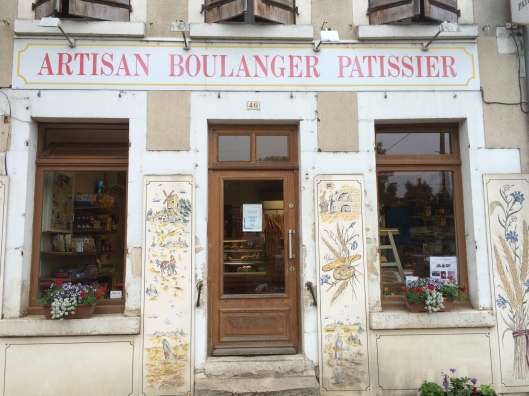 New towns. New boulangeries. Old favorites and new treats. There is absolutely no better way to start your day than a quiet walk through the morning chill to a warm boulangerie. 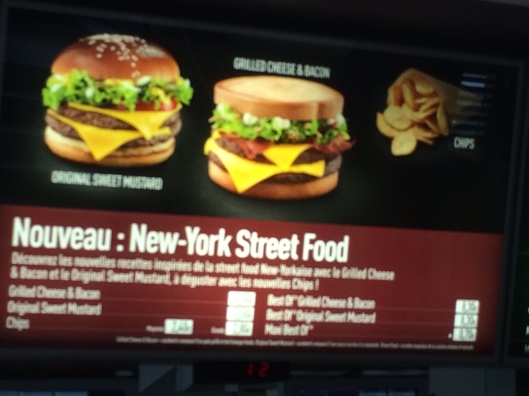 On the other hand, this summer’s featured menu at French McDonalds offers items no Manhattan street vendor ever sold.

Enough already. It became time to barge beyond our comfort zone. Like to another country. Or two.

Our boat insurance requires that the barge be hauled from the water and examined by a surveyor every six years, primarily to take ultrasound readings of 200 spots on the hull to measure the thickness of the steel. If he finds any thin spots, a steel plate gets welded on top of it. HOOP DOET LEVEN, which spent most of its life in the care of one Dutch family, was well looked after and has hardly a blemish on her bottom (can’t say the same for myself, at my age.) There are few shipyards in France, or at least the inland part of France where the canals go, that have dry docks or cranes large enough to get our 65-ton barge from the water. Besides, the French boat yards don’t have the best reputation for speedy completion of such work. To be completely honest, most don’t have the best reputation for the speedy commencement of boat work. And then there is August. When the entire country is on vacation and no work gets done.

We’d planned on taking HOOP to the Netherlands next Spring to get our work done. The Dutch yards have great reputations, and our boat would be a peanut compared with the large commercials these shipyards build and maintain. Then we visited friends who’d been waiting five weeks for work on their boat to start, restart, and end. It turned into an almost three month process. In the mean time the yard had welded temporary fittings to their boat’s underside to carry off their toilet and sink discharges and they had to walk across a small bridge to get to their high and dry boat. And clean the inside of the boat every day where boatyard dust had filtered in. It was not a pleasant existence.

The visit with our friends convinced us that we did not want to live through that experience, or have it consume the first half of next summer’s cruise.

Some quick calculations showed that if we went into delivery mode this summer, rather than lazy cruising mode, we could get to Maasbracht in the Netherlands, where Tinnemans Scheepsbouw, our shipyard of choice, was located before it was time to return home at the beginning of September. We finally left the Canal du Centre, which lazes through the southern Burgundy vineyards, and headed north up the River Saone. Pedal to the metal is the technical nautical term. We dropped in at our former home port of Auxonne and double checked our plans with Roy and Carol Sycamore, the port captains there. They’d run a commercial barge in France for years. No problem, Roy said. Just start at 7:00 every morning and don’t stop until the locks shut down for the day.

So we channeled our inner Roy and Carol and pretended to be commercial barge skippers. We roared up the rest of the Saone in two days then roared through the Canal du Vosges, which is infested with locks. At one point we went through sixty locks in three days.

The Canal du Vosges was infested with locks. To speed up the process, Sandra ran ahead on the tow path to trigger locks before the barge arrived.

We’re now on the Meuse River, heading north toward Belgium and the Netherlands. We’ll follow this river all the way to Maasbracht. At the Dutch border it changes its name to the Maas. And by then it will fill with huge commercial ships.

We’ve covered enough ground – or water – by now that we can slow down the pace. We traveled through historic World War One territory, in this hundredth anniversary year. We passed through Verdun, where the worst of trench warfare led to about 750,000 casualties on both sides. The German strategy at Verdun was just to kill so many French that they lost the will to fight. We’d stopped in Verdun five years ago. Couldn’t do it this year. Instead, one night we pulled over to the side of the canal in deep woods, all by ourselves, and walked up a trail through a corn field to Fort de Troyon, where 450 French held off 10,000 Germans and blocked an assault on Verdun from its otherwise unprotected south. The deep underground vaults where the defenders lived are peaceful now. Except for the two French soldiers in full head-to-toe camo suits and berets. Swinging weed whackers on the sloping sides around the still-existing shell craters from the German bombardment.

You’ve got to wonder what these guys had done to be assigned to weed whacker duty in the hot sun. 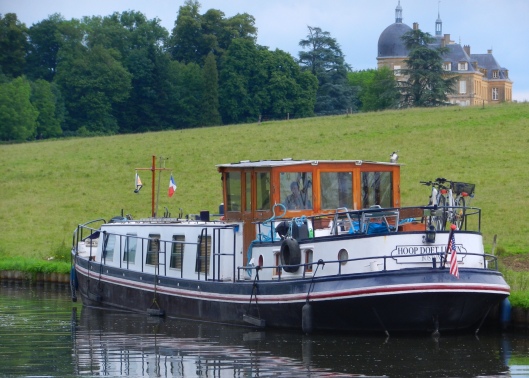 No matter how rushed we were, there was always time to pull over by the side of the canal for lunch next to a quiet chateau.

We’ve been here before. We’re following the route of our first week ever on HOOP DOET LEVEN, five summers ago. Locks, and a tunnel that left me sleepless in anticipation then, were routine now. We’ve come a long way on HOOP to get back where we started. What was terrifying then is comfortable now.

Places beyond our comfort zone. That is frightening. But healthy, I suppose.

We’ll let you know what happens.

2 thoughts on “Cruising beyond our comfort zone”