We are so fortunate this year. What with the weeks of torrential rains we’ve saved an absolute fortune on sunscreen. My buy-a-Tesla fund is bursting with cash as a result. I knew the rain was serious when I woke up the other morning, looked out the windows and saw pairs of animals lined up, two-by-two, patiently waiting to get on board the barge. We’d planned on floating to Paris. Now Paris may float down to us.

But we persevere. Adapt.

To locate ground zero of the worst flooding, start at Hoop Doet Leven’s bow where we were moored at Sancerre (yes, THAT Sancerre, fabulous white wines) and look about 20 miles north. That is where the city of Montargis, which bills itself as the Venice of central France, looks more like Atlantis. That is where the Canal de Briare, which we were planning on taking north to the Seine, broke. Yes, the canal broke. Rain softened the canal walls to the point where they gave way, dumping the canal waters into a farmer’s field. It will likely take months to repair.

The wall of the Canal de Briare, where we had planned to travel toward Paris, collapsed, dumping the canal onto a farmer’s field.

So Sancerre was as close as we’ll be getting to Paris this summer. We found a wide spot in the canal – most of the canal is about 50 feet wide, Hoop is 70 feet long, so a U-turn can’t be performed just anywhere – and executed this year’s demi-tour, a 180 degree turnabout. We examined options for cruising to our planned winter mooring at Toul, in Lorraine and settled on a route back through Burgundy – red wine – and then north along a canal that climbs through the foothills of the Vosges Mountains.

We know a woman who makes scrumptious chevre – goat cheese she rolls in herbs – on the Vosges canal.

We’d been warned early on by friends that cruising plans on the French canals are carved in Jello. To drive home the point, at the same time we were trapped at Sancerre, where even in the worst of the downpours, when we couldn’t bike to the vineyards the vignerons obliged by delivering cases of white wine to the boat, our friends were trapped in Meaux on the Marne River. They wrote about watching entire trees roaring down the river past their boat. Meaux, however, is the home of the lusciously creamy brie de Meaux, among my favorite cheeses.

Even the darkest clouds in France have delicious linings.

We tell ourselves we have to remain open for serendipity to work its wonders. The reality is that we have little choice in the matter. Plans in Jello. Thats our reality.

Barging is full of surprises. This lock tender was a sculptor between boats arriving at his lock.

In the mean time, though, France continues to be France and France continues to fascinate us. Every day. Without fail. Right now we’re in Nevers – back in Nevers – tied up to the canal bank. It is Sunday. Passing by on the towpath is the Loire Marathon. Passing by on the canal is the most clever tourist business I’ve seen, a tour boat powered entirely by the paying passengers themselves, with paddle wheels linked to bicycle pedals and hand cranks operated by the passengers. A no-overhead business.

This afternoon we treated ourselves to a fancy three hour Sunday lunch at a Michelin one star restaurant, followed by a night in a hotel with a bath tub. What a joy to be married to such a low-maintenance woman who in return for climbing slimy lock walls in the rain and pounding steel mooring stakes with a sledge hammer, all she asks is one night a month in which to soak in a real bathtub.

We’d been listening to country music all afternoon and Sandra was inspired by Johnny Cash singing about John Henry swinging his hammer. Here she is hammering our three foot long mooring stakes into the grass.

We’ve waited out the downpours in our own ways. Sandra converted the aft cabin, the original living quarters for the Dutch family that operated Hoop as a commercial barge, into her art studio. When we’re under way, the hot engine room provides a drying rack for her paintings.

There is no shortage of landscapes, or cows, to pose for her. The next edition of On a Barge in France – available on Amazon in paperback and e-book – will be illustrated with original art. 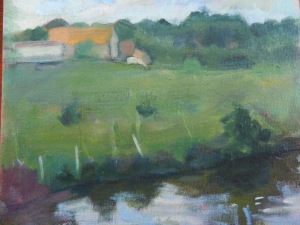 Sandra has found no shortage of landscapes to paint along the canals.

And no shortage of cows to pose for her either.

The summer continues. We hope to see the sun in a week. Or two. In the mean time, our arms are spread wide waiting for France to present us with her next surprise. And wonder.

And, just in case, we’re keeping a wide net on a long pole at hand on the forward deck. Just in case we spot the Mona Lisa floating by.