The world is topsy turvy. Migrants fleeing war, famine and poverty are pushing Europe to reexamine its generosity. And morality. The European Union itself, the political experiment that brought an end, or at least a temporary halt, to the chain of wars that plagued the previous century, is teetering on the edge of breaking apart. In just a month the United Kingdom may huddle behind its moat – the Channel – and drift away from the rest of Europe. The financial collapse of Greece is far from being resolved.

Here in France, the State of Emergency declared after the Paris bombings has been renewed yet again, granting extraordinary powers to the police. Francois Hollande’s approval ratings are lower than the U.S. Congress’. Nuit Debout – Stand Up All Night – fills Paris’ Place de la Republique with France’s version of the Occupy Wall Street movement. But with more class, more élan, since “occupy” could be viewed as just a way to entertain oneself. “Debout,” however, as every French school child knows, since every French school teacher is a socialist union member, is the first stirring word of the Internationale, the anthem claimed by communists, socialists, anarchists, democratic socialists, and social democrats. But not yet by Bernie Sanders.

And home in the states, the Presidential election blurs the boundary between reality and reality TV, confirming Karl Marx’ theory that history repeats itself first as tragedy, second as farce.

So, interesting times. And we didn’t quite know what to expect in France this summer.

Donald Trump, it turns out, is just a punch line here without the necessity of a joke. In the midst of most any conversation I can shake my head from side to side and say “Trump.” The immediate French response is to laugh. Then to make that untranslatable “poof” sound accompanied by raising both hands, palms up. One vacationing Parisian dismissed Trump to me as le buffoon.

To be honest, it has been disappointing that the real estate mogul who seems to have a lease on the top half of the front page of the New York Times is taken so lightly in France. They don’t share my terror.

In France this summer, however, the threats of a fascist United States, of hordes of marauding Muslims, of financial and political collapse of the European Union are overshadowed by the single all consuming controversy that arouses French young and old, left, right and centrist. A controversy summed up by a defiant battle cry:

This is a battle only France can fight. Or understand.

The circonflexe – which for some unknown reason is spelled “circumflex” in English – is a tiny upside down vee-shaped accent symbol that sits atop some letters. Like a teeny pointy hat. 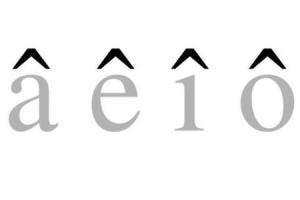 The circonflexe rests atop letters like a comfortable hat.

For example, hospital is spelled “hôpital,” forest is “forêt,” coast is “côte,” a feast is a “fête” and a beast is a “bête.” Notice the pattern? Back around the year 1066, when William the Conqueror, who was French, conquered England, which was English, there were lots more “esses” in French. Forest was still “forest.” Hospital was “hospital.” As French words were incorporated into English, the ancient “s,” too, crossed the Channel and remains in English to this day. Not so in France. Because the French have so much to say and so little time – merely a single lifetime – in which to say it, they found they could speed up their speech by not pronouncing entire segments of the alphabet. For example, the last Frenchman to pronounce an “h” out loud had his tongue yanked out around the year 1200. The letter “s,” at least many of them in the middle of words, was not just silenced but excised entirely on the grammatical guillotine. So, between unpronounced but still existing letters and all those entirely disappearing letters, “hôpital,” which silenced its “h” but lost its “s” is now pronounced “oh-pee-tal.”

France being France, however, just as the tiniest village, in addition to its boulangerie and hair dresser, has a war memorial to commemorate the town’s enfants lost in one war or another, the gone-but-not-forgotten “s” in oh so many words is memorialized with a proudly erect little wedge. That is the circonflexe. A historical marker. A piece of French history. A reminder of letters long gone. No, no, no. A piece of France itself. The proud circonflexe. Like a tiny Eiffel Tower in the middle of a word. Having no meaning. Making no sound. But yet tré importante. 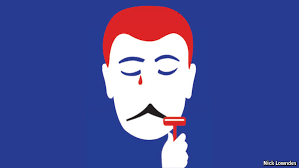 The circonflexe is thought to have been inspired by the proud mustaches of ancient Gauls.

So imagine the consternation, the horror when the Conseil supérieur de la langue française (High Council of the French Language), and the Académie Française, the ultimate guardian of the purity of the language, announced that as of the new school year the circonflexe will no longer be taught in French schools. The language would be “simplified.”

This is a big deal. 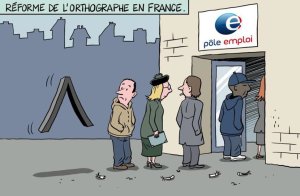 As with a huge percentage of French youth, the circonflexe will soon be out of a job.

Every Frenchman will in one stroke lose his maîtresse and will have to console himself in the arms of some unknown entity he will have to refer to as his maitresse.

It remains to be seen what will happen when schools reopen in September. Will there be strikes? Boycotts? Marches? Rallies? Only time will tell. 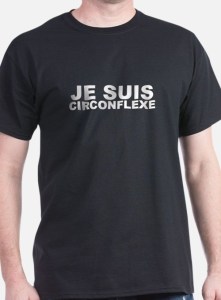 Inspired by the Je sui Charlie movement, save the circonflexe tee shirts are hot in France. 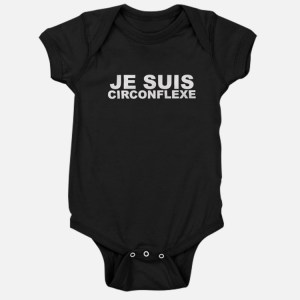 Even babies, too young to yet use the circonflexe, can join the cause.

But wait, there’s more. Once the walls of the citadel of the French language began to crumble, nothing remained sacred.

Also in September, it has been declared, every onion in France will lose its “i.” With one stroke a million French “oignons” will become “ognons.” This is not simplification. This is desecration. 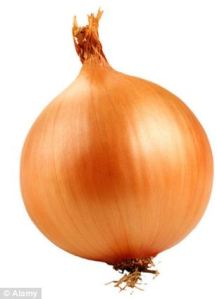 This is an oignon.

Let the European Union fail. Say adieu to the euro. But do not take away my oignon.

This will become an ognon.

Never an uninteresting moment in our second home of France.

You have to wonder whether this kind of controversy could erupt in the United States. What would be the reaction were President Trump to announce that from his first day in office, the dot over every “i” would be banished, stopped at the borders, deported to Mexico? No, come to think of it, President Trump is more likely to rule that the dot will be tripled in size. When he is elected every dot over every “i” will be huuuuuuge.

7 thoughts on “Cruising into controversy”