Forty years of sailing old wooden sailboats in New England, mostly with minimal engines, did not provide much guidance in operating a 70-foot, 65-ton steel commercial barge in narrow canals. Besides, European Union countries require a license for such boats, called an International Certificate of Competency (ICC) with a CEVNI (the international agreement on inland waterway navigation) certification. Fortunately, a British couple living on their barge in Northern France run a school to provide just such a license. (www.bargehandling.com). We flew to France last April and took the course from Tam and Di Murrell in Cambrei. This is Tam and Di about Friesland. 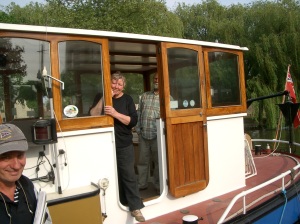 We learned how to drive into locks, how to handle mooring lines in the locks and how to do a U-turn on a 24 meter barge in a mooring basin that is about 26 meters wide. Then we took a written test on canal navigation and signs (the rule of thumb is that however it is done in the States, do the opposite: red-right-returning? Nope. Red-nuns-are-pointy and green-cans-are-flat? Nope).

We followed up Tam and Di’s course with a week with Kevin Hartwell on his barge Nilaya, cruising from Verdun to Nancy. (www.bargenilaya.com). This is where Sandra sharpened her line handling skills in the locks. 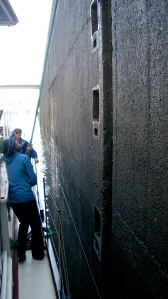 She had help from a friendly lockkeeper, who ushered us through a series of locks on the River Meuse, even though he was technically on strike that day. They even swapped Sandra’s WoodenBoat hat for his French VNF cap.

More importantly, Kevin introduced us to the slow motion pleasures of floating through the French countryside. After a week we were hooked, and shopping for our own barge. We went home and read every barge web site we could find, bought every book written about barging and joined the DBA, the Barge Association. (www.barges.org). And as an anniversary present, Sandra received her own set of custom-made practice bollards, set up in our living room, to perfect her lassoing skills.

5 thoughts on “How do you drive a barge?”