We’ve learned that in this time of financial instability, living in retirement and getting by on what we’ve squirreled away during our working decades, it is vital that we pay close attention to the markets. Not the stock market. That has treated us as kindly as a nasty neighbor obsessed with tree limbs swaying over the fence line. No, in France the market we track is the local marche’, or to be more precise, the marche’ de pleine aire, the outdoor market. Most towns have a market day. The larger the town the more market days it has. Reins, a city, has a market, someplace, every day.

Today (and for a few more days) we’re tied up at a wall above a lock on the side of the River Marne, about twenty miles east of Paris, waiting for our scheduled May 30 arrival at the Dutch Barge Association summer rally there. We are surrounded by trees, fields and the now-wide Marne beside us. Peniches, the large commercial barges, hustle past us, those traveling en aval (downstream) furiously slowing to enter the lock just below us, those en amont (going upstream) churning foaming wakes as they accelerate (from a standstill to a crawl) out from the lock. Since we’ve become resident here the eclusier (lock keeper) has driven us to the nearest town for grocery shopping (leaving us to wonder what happens to barges arriving at the lock while he was giving us the town tour for an hour). In return, Sandra walked his two dogs, who, not surprisingly, would immediately sit at her feet in response to “assis au pied.” It is a nice break before braving the Seine in a few days.

But today is market day in the next town upriver from us, Lagny-sur-Marne. We unloaded our bikes from the aft deck, strapped on our panniers and pedaled eight kilometers along the pathway next to the river. Lagny has a great marche’, as distinguished from a supermarket.

But first, lest we wallow idyllically in the quaintness of everything French, we have to note that France is chockablock with super-duper-supermarkets, and we’ll confess that we spend our share of time, and euros, at them. The day after our arrival at the boat in Toul we were shown the way to the local Cora market and were blown away with the variety of what it sold, from flat screen Samsung televisions to Giant Verte canned green beans (as in “ho ho ho from the Valley of the Giant Verte”), from Old El Paso tortillas to foie gras, lawnmowers to fresh bread, plus four aisles – four long aisles – of wine. Different versions of these stores, and the French clones of Costco and Home Depot, are common. And they are crowded. And the prices are pretty good, although a liter of Coca Cola and a liter of Bordeaux cost about the same.

But what is fascinating about France is how easily these anonymous 21st Century institutions – each with the individuality and charm of a McDonalds – rub cultural shoulders with as medieval an institution as the marche’. Farmers have been carrying their products to the same market squares in these towns since the days of the Black Plague, since before the Crusades, probably since before  Roman legionnaires were the first unwelcome tourists to visit here. They sell what is in season. We waited too long to visit the local strawberry farmer’s table and the best were snapped up by the time we returned. The man selling preparations from tomatoes and olives and spices and nuts chatted with us, in English, between customers, seeking assurance that Obama “and not that other person” would win the election. The woman cooking crepes introduced us to her grandmother.

Madam Crepe … and her grandmother.

Fish are arranged in schools by species. The woman selling fish sold us skewers covered in her special honey marinade. 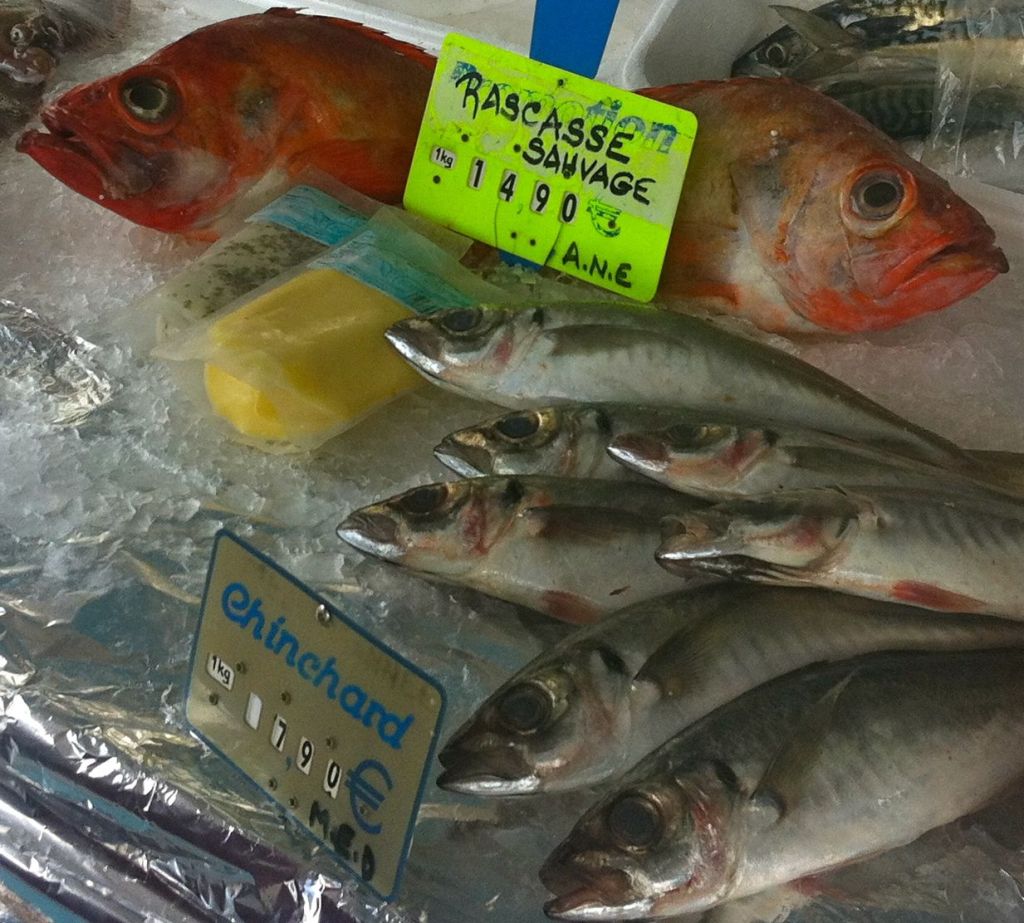 Schools of fish swim through the marche’.
The marche’ has one cheese vendor after another and, we’ve learned, cheese comes in grades. Supermarket cheese is better than we get at home, but only the desperate buy it rather than from the fromagerie at the marche’. We’re on the margins of Brie and the marche’ cheese oozes over your bread.

How do you choose from a hundred different cheeses?

Meats are the smallest part of what the butchers sell, rather, it is their own sausages and pates, dried, smoked and cured meats that fill their displays. 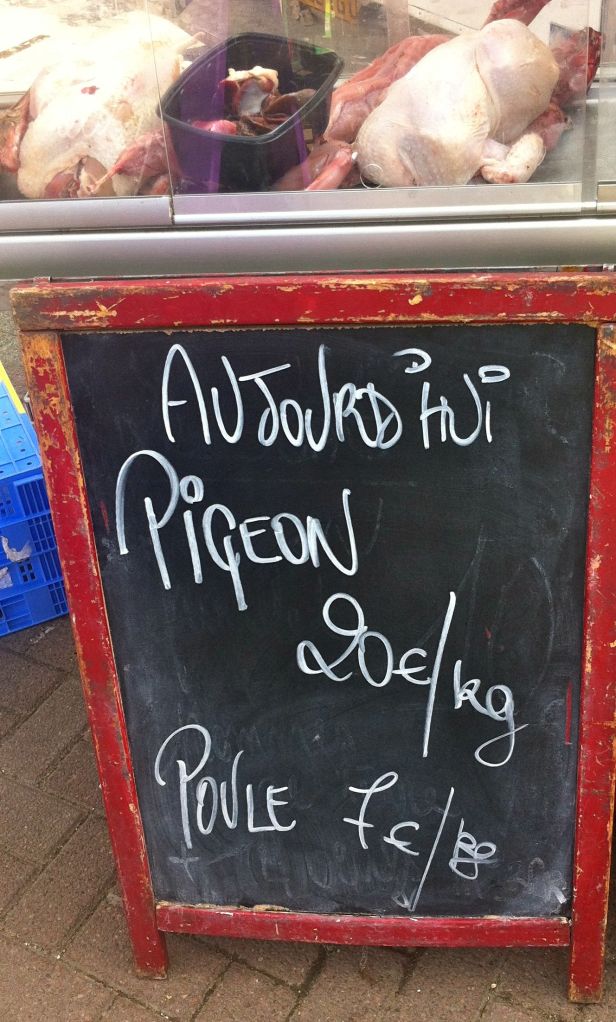 – Some daily specials take more courage than others.

Outside the food area are stalls selling everything from toys to buttons to shoes and dresses, books and tools and even a truck with sides folding down to reveal an array of mattresses.

We can write about the marche’ and we can upload photos of the marche’ but we are disappointed that the 1950’s promise of the miracle of “scent-a-vision” hasn’t been produced by a Silicon Valley dot com corporation. The marche’ is as much a feast for the nose is it is for the eyes, ears and, of course, taste. Besides the spices and the baked goods, the platters of paella and prepared foods to go, there is the powerful aroma from the rotisserie chicken trucks, trucks in which a side folds down to reveal row on row of skewered chickens rotating in front of gas burners, juices dribbling from the highest  to the lowest and down onto the potatoes resting in a pan on the bottom. You point to a chicken and the roto man stuffs it into a sack and spoons in juices and potatoes. We get three meals from one of these chickens, and usually get to chat with the farmer who raised it.

The roto-chicken man. We get three meals from one.

The marche’ is an experience. After stuffing our bike bags we sit at an outside table sipping coffees and watching people. The table is ours for as long as we want. We probably could have stayed for lunch … and dinner. The entertainment at the cafe is free: all of France walking by, or sitting at the next table. 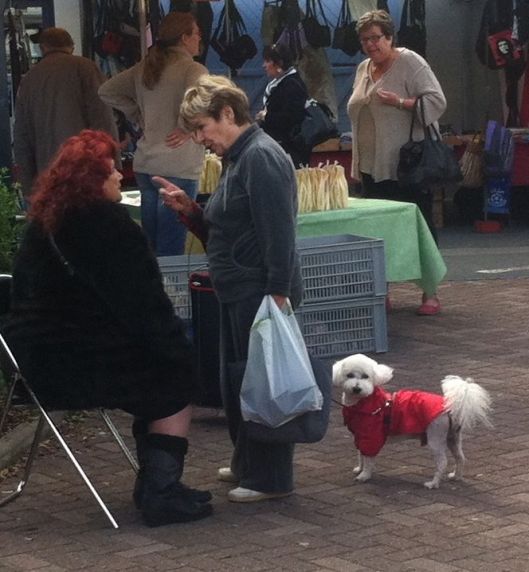 People provide the entertainment, and we – the etrangers – are part of the show.

The marche’ is a family adventure.

But eventually it was time to pedal back to the barge and watch the river flow past. Not a bad way to spend a morning.

One boulangerie had the longest line. It had won the best baguette award in the region two years in a row. We bought two, and that was all we could stuff in our saddlebags.