Lest this whole affair sound a tad too idyllic, we’ll tell you about today’s yachting adventures, which are not yet completed. We’re long time sailors (HONESTY WARNING: the use of the plural should not be taken to imply that Sandra even once enjoyed waves breaking over the cabin top or being compelled to casually inquire as to whether we were all going to die at sea). Wind has been our Friend. Calm has been a Bummer. All that changed once we started motoring around in what is little more than a 70-foot, flat-bottomed steel shoebox. Sailboats have a deep keel projecting down from the center of the boat. Moving water is much happier meeting the skinny front edge of the keel than it is trying to push aside the wide flat side of the keel. That’s how sailboats go forward even when the wind is pushing them sideways. And that’s what all of our sailboats did, more or less. When the wind blew from the side of the boat you adjusted the sails, the keel bit in and the boat moved forward, at right angles to the wind direction.

Hoop Doet Leven, our steel shoebox, is placidly content to slide through the water bow first, stern first or cabin side doors first. The big cargo peniches, of which Hoop in her younger days was a little sister, settle six feet into the water when they are filled with grain or sand or whatever, water ballast when they have no cargo. Their entire flat sides become the equivalent of a keel. Hoop’s only cargo is us, some furniture and several cases of wine. She sits high and proud in the water. In fact, the square footage of Hoop’s side is almost exactly the same as the square footage of the mainsail on our sailboat back home. As a result, when the wind blows from the side Hoop moves sideways.

Today was supposed to be an easy hop from Berry-au-Bac, where we spent the night with five big peniches, to a small town just outside Reins, the capital of the Champagne region, home of a magnificent cathedral in which all the kings of France were crowned. Home to Veuve Cliquot, Pommery and Taittinger champagnes, among others. Just about 15 kilometers and nine locks. Four or so hours. Be there for lunch.

We woke to a downpour, but a windless one. That is do-able, more so for Harvey in the wheelhouse than Sandra on the foredeck handling lines in the locks, but do-able. We’ve had rain almost every day for three weeks. April showers, right? A cargo peniche had nestled in bow to bow with us in the evening, without our even noticing. His mooring line was on top of ours. 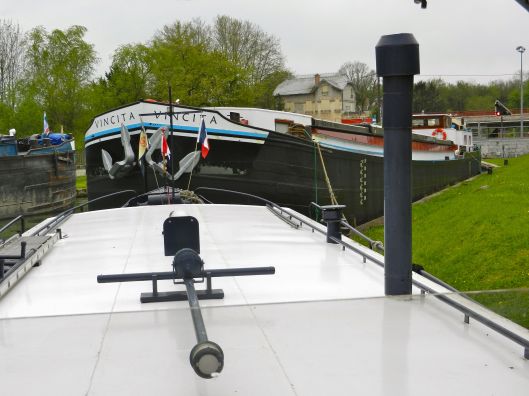 We woke to find a new neighbor, his bow just a meter from our bow. Just a young captain and a dog for crew.

The captain, a young man, and his crew, a white German shepherd (canine, not human), were carrying the trash to a bin on shore. Sandra grabbed our trash and chatted him (them) up. He was leaving immediately, and commercial boats have priority over pleasure boats in the locks anyway. He casually flipped off his mooring lines and motored off to the lock. We waited for him to enter the lock and took off ourselves, planning a tricky maneuver going in reverse for several hundred meters then turning 90 degrees to enter the lock. Piece of cake. Even in the rain.

Except that the moment the mooring lines were free the sky turned black, the rain increased and the wind, the wind howled. The first victim of the blow was our intended reverse 90 degree turn to port (aka left). The wind preferred, instead, a 270 degree turn to starboard (the other left). The math worked out and we had no choice anyway so there we were, all lined up for the lock straight ahead. Problem was Hoop was moving sideways, across the face of the lock rather than straight into the opening. Lots of frantic wheel spinning, full forward, full reverse and, eyes closed, jam the throttle and bounce into the lock and there we were, maybe with a bit of painting required, but maybe not. We’re well fendered.

Lock No. 1 of 9 completed, we motored off to Lock No. 2, just a few hundred meters away. It took two hours to get to it. When the lock appeared around a bend, there was Sandra’s peniche buddy, and his dog, rising in the lock. We had to wait. Waiting turned out to be simple because the wind decided we should wait on the downwind side of the canal. We drifted to a stop, our tire fenders over the side to cushion the arrival. Oddly, though, there was a meter or so of water between us and the side of the canal when we came to a sudden stop. We were aground. OK, no big deal. We have two 15-foot wooden poles, boat hooks, with medieval fittings on the end. Sandra uses a boat hook to lift a mooring line on and off the bollards in high locks. We also use the long poles to push us away from some moorings, or away from the side of the canal when we stop for lunch. The idea is that you want to shove the aft end, where the propeller lives, into deeper water before putting it in gear. Protect your propeller is a key rule.

What to do? Call the Coast Guard for help? There isn’t one. Boat US ( a commercial rescue service at home) would charge a fortune in mileage fees to get to us. Pas de problem. No problem. It was only 9:30. We hadn’t had breakfast. We still had eggs Sandra had bought from the farmers of Malmy. An entire baguette remained in our bread bag. We have sacks of espresso. Breakfast. Canalside. The wind couldn’t blow forever.

And it didn’t. An hour or so later the rain stopped, the sun came out and the wind died down. We managed to pole away from the bank and headed for the lock, which had remained open and waiting for us through the whole affair. We pointed straight at the lock and, bam, the wind returned. With a vengeance. Bing, bam, pow and we rattled our way in.

This wasn’t fun. The wind kept increasing. We ricocheted through two more locks then called it quits. We went through Lock No. 4 then tied up to the upwind side of the canal. That’s where we sit now. Maybe for the night. But here is where we are stranded. Not bad. Once again, we adapt. 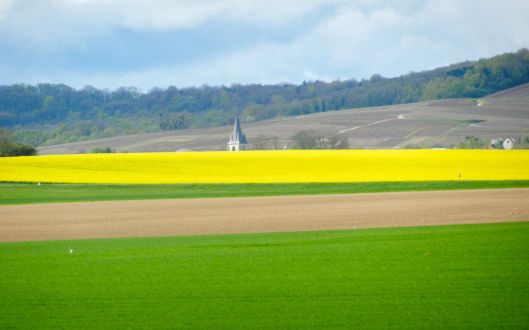 Marooned in the countryside. The yellow fields are rapeseed, from which canola oil is made.

5 thoughts on “It isn’t all bordeaux and croissants”