Today we finally left Toul and started the long meander to Paris. Our first day on the canals involved climbing from the Moselle Valley to the Meuse River. We worked through twenty locks and then, for good measure, an 800 meter tunnel. This was our introduction to handling the barge, and yet one more unsuccessful experience in our search for our first nasty person in France. Passing through the dreaded first lock we met two workmen from VNF (Voie Navigables France, the French canal authority). As with all encounters French, this involved numerous bonjours, bon journeys, messieurs and madames and au revoirs, interlaced with rapid and indeciferable friendly French. Harvey, in his best Marcel Marceau French, said this was his “premier ecluse,” his first lock in his new batteau. Word passed rapidly on the VNF grapevine and by our third lock we’d acquired a friendly VNF guy in his VNF van who just happened to be driving from lock to lock all day at the same slow pace we were travelling. He just appeared at each lock when Sandra missed lasooing a bollard, just in time to place her loop where she intended. When Harvey couldn’t reach the lever to start the lock cycling, voila, it cycled anyway. By our twentieth lock of the day, our guaduan angel was still appearing to shepherd us through. Yet one more nasty French person, right. 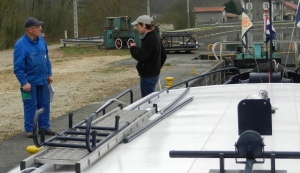 Our VNF guardian angel shepherded us through our first day

By afternoon, we’d passed through all twenty locks with a few bumps and scrapes to our 86-year-old barge, but with no visible scars. Then at the top of the whole flight of locks we faced an 800 meter tunnel through the hill separating the two valleys. We emerged onto the Meuse River, heading north toward historic World War One battlefields, Verdun, Sedan, the Ardennes, spending the night in the small village of Pagny-sur-Meuse. 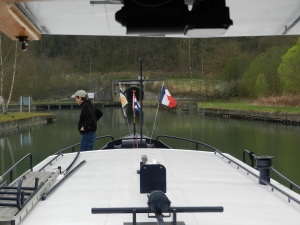 The Foug Tunnel, subterranean yachting at its finest

This town boasts of La Favorite, a favorite French truck stop. Truckers know their food so we stopped there, too. A Fench buffet and an endless “wine fountain” explained why the truckers were there, and they certainy were, with truck after truck pulling off the highway, log carriers, tankers and tractor trailers. All these truckers sat at long tables, whispering to one another as they filled and refilled pitchers of wine. It was so civilized, nonetheless, with all the tough truckers whispering, shaking hands as new truckers arrived and the ocassional kiss-kiss on the cheeks.

A place not yet on the Rick Steeves tourist radar.

All this followed yesterday’s encounter with French Immigration as we appeared for our medical exams and interviews for our long-stay visas. It was not quite Harvey’s great-grandparents experience at Ellis Island, at least for us. Had Sandra worn a burka or Harvey African robes, the experience surely would have been different. For us, alrhough we’d anticipated problems because we couldn’t prove our childhood vaccinations and we’d dreaded that some form would lack some mandatory stamp, the toughest part was the eye exam, not because we couldn’t read the eye chart but because we hadn’t memorized French names for the letters. “H” was “aish” and “Z” was “zed,” but “I” being “Ee” and “E” being “aye” was tricky. Nonetheless, we passed and moved on to the physcal, which was odd in that it wasn’t at all physical, the doctor never touched or examined us but just asked a few questions. Of Harvey he wanted to know wherther he’d “married a French girl.” Of Sandra he asked whether she smoked and she did not know the desired answer, this being France. By the end of the day we had new colorfully holographic visas in our passports allowing us to remain in France for one year, renewable annually. The key to getting the visas turned out to be our cell phone contract. If we were good enough for the phone company to accept as French residents, Immigration was satisfied.

Over the next few weeks we’ll work our way up the Meuse River and canal and into the Ardennes, on a slow journey to Paris by June 1.

9 thoughts on “Under way at last”